HHVM is a highly performant PHP runtime. In fact, it is nearly 40% faster than HPHPc, and only getting faster. For example, the HHVM team just rewrote the JIT to use an SSA intermediate representation (IR). HHIR (HipHop Intermediate Representation) is a strongly typed, SSA-form intermediate representation, positioned between HHBC (HipHop Bytecode) and machine code. It allows HHVM to perform optimizations that were very difficult to perform with the old JIT, using the context of the current runtime environment (e.g., reference counting elision). 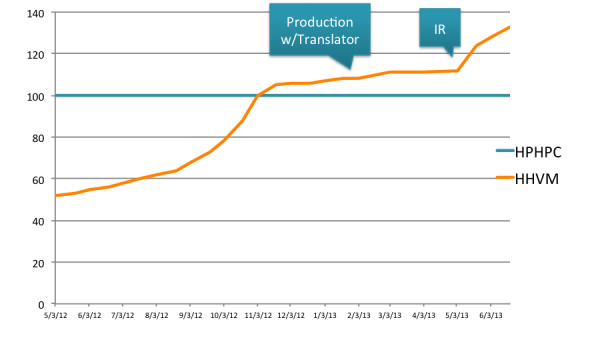 HHVM Performance with addition of IR

Facebook continues to use fewer resources because of the continual performance increases provided by HHVM. However, there is a problem…

Performance is critical, but it isn’t everything. In order to gain broader adoption for HHVM, being able to run popular frameworks is a must; in other words, we can have the highest performing PHP runtime, but if doesn’t run real-world code without a lot of pain, then it won’t be used widely. Understanding this, we are putting serious resources around parity with the PHP runtime.

The table below shows the team’s current progress towards parity with 20+ of the most popular frameworks used with PHP today. These frameworks come with unit tests that are run via PHPUnit. The unit tests provide a good indication of how well a framework will ultimately run when used in production. The unit tests were run on CentOS 6 from the latest branch of the framework from GitHub, on the latest development build of HHVM.

It is clear that HHVM is lacking in full support for these frameworks. The first step is to implement the functionality that is causing the HHVM to fatal with some of these unit tests. From the results, in addition to bugs, the HHVM team now knows that it is lacking in support for:

After ensuring that all unit tests can be run to completion (i.e. no more fatals), the team will continue to implement the functionality that is causing the tests to fail. In parallel, the team will be working to implement any functionality required to allow these frameworks to run on HHVM in the real world (e.g., ensuring the base cases and tutorials can run). Blog posts will be coming soon on how to run the unit tests for each framework on HHVM and/or getting the actual frameworks to run on HHVM (hopefully with less and less workarounds as functionality is implemented).

The HHVM team’s goal is to reach at least parity with the PHP runtime on these (and other) frameworks (the PHP runtime passes the unit tests anywhere from 95-100%) [11]. Plans are in the works to have a near-live dashboard showing the progress on reaching this goal. If you do not see an important framework in our list that should be added to our testing, please comment below and we will add it.

Moving forward, the HHVM team is going to increase the amount of information around the status of HHVM. Parity status is just one piece of this puzzle. Here is an idea of the plans for the HHVM team in the next 6-12 months:

While our small team is aggressively trying to improve HHVM, we know that we cannot address all compatibility concerns as quickly as we would like. Thus, we sincerely welcome contributions, particularly any that can help HHVM reach parity with your desired workload(s). The team will be happy to review and assist with pull requests. Particular thanks to Daniel Sloof, Markus Staab, Vadim Borodavko, Kristaps Kaupe, huzhiguang, and the many others in the community currently pushing commits to our source base.

If you do not have a specific workload or application in mind, but still would like to be involved in HHVM, please look at the issues tagged zend incompatibility for known conflicts with the PHP runtime. Tests can be added easily (see the README) and Travis-CI is integrated, which provides quick and reliable test results on commits. Visit us on IRC channel #hhvm on freenode if you need further guidance.

We know there is work to do, but the HHVM team’s #1 priority right now is being able to run all the (sane) PHP code in the wild.