On November 4th, the HHVM team went on a 3-week performance and parity lockdown. The lockdown officially ended on November 22nd. Overall, this lockdown was a qualified success. Success was measured on 3 vectors: 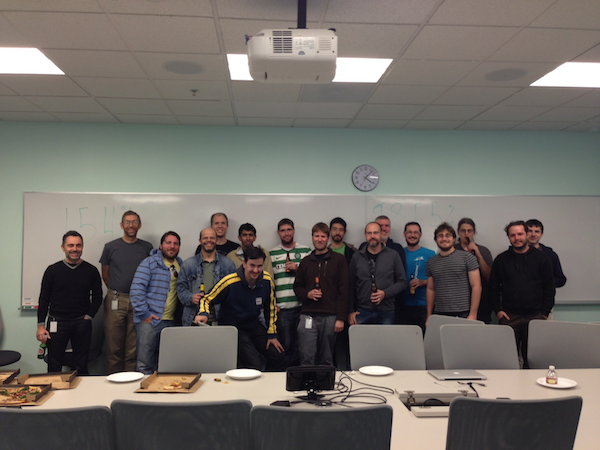 The HHVM Team at the post-lockdown party

Going into lockdown, the team knew that awesome performance alone would not suffice in making HHVM a viable PHP runtime to be used out in the wild. It actually had to run real, existing PHP code reliably. So we made that a first class work item (as it will continue to be into 2014). Our first step into improving PHP parity was to look at Github, see which PHP projects were being used by many people (via their “star” rating) and make sure their unit tests would run successfully on HHVM.

Let’s just get to the numbers. After over 125 diffs, here are the results of the parity portion of our 3-week lockdown.

Recall the table of parity before the lockdown. Now, here is our graph of improvement after the lockdown: 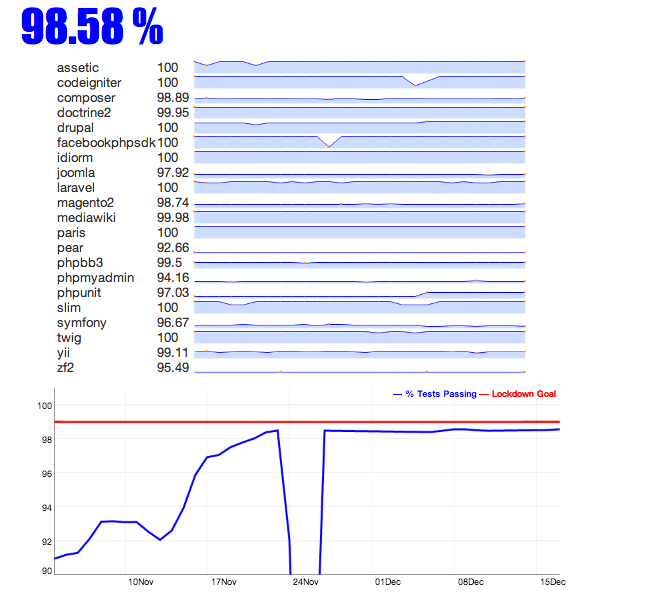 The updated unit test parity results after our 3-week lockdown

As you probably can see by the graph, we were successful in our efforts to improve unit test parity nearly across the board:

Many of the diffs and updates that enabled our unit test parity increase are part of the HHVM 2.3 package. Some key improvements that had significant impact on our unit test results were:

However, there are a few curiosities…

The 21 open source projects that were used as our initial baseline to increase our unit test parity were, as stated above, chosen on popularity. However, they were also chosen based on their use of PHPUnit and on how well they would work with our testing framework. Given the sheer number of unit tests that come with some of these projects (e.g., Symfony and ZF2 each have over 10K tests), we needed to come up with a testing framework that would allow us to run the tests for all of the projects in a speedy manner. So the team developed a script that would download, install and run the unit tests for all of the 21 open source projects in parallel. The script is still a work in progress, but it allowed us to run all 50K+ unit tests in 30 minutes to 1 hour (depending if the JIT is on) vs the many hours it would take to the unit tests serially. That script is located in the HHVM Github repository.

You may also notice that your favorite open source project is not currently in the list above. There are a couple of reasons for that. First, we couldn’t cover all open source projects in a 3-week span. Secondly, while open source projects like CakePHP are very important, and we will add them to our testing framework, there were some setup and configuration problems (e.g., requiring of a database) that wouldn’t allow us to add them in a short manner.

Finally, as discussed in our pre-lockdown blog post, the HHVM team created a bunch of “stickies” to help guide our work. The stickies were placed on a “number of failing tests associated with this sticky task” vs. “number of days to implement”. So, we generally worked from top left to bottom right to get the most bang for our buck.

It is worth pointing out some of the assumptions and caveats that went into to coming up with the statistics above. 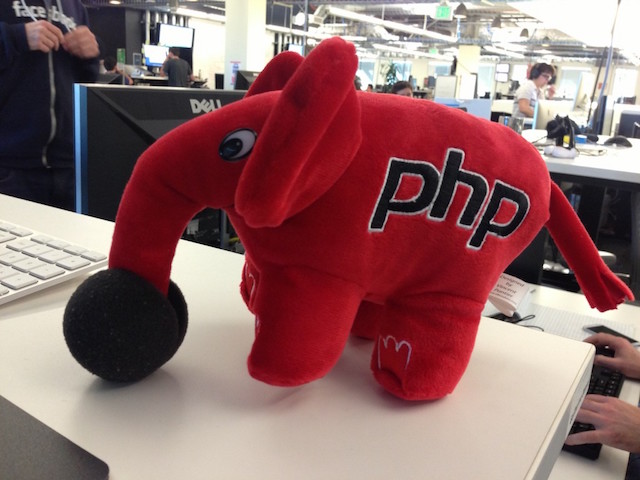 Sometimes there is clowniness when it comes to PHP

There were times when code changes were necessary to the actual open source project in order to successfully run all of its unit tests. For example, a change may have been necessary in order to support our parallel testing framework. In other cases, there were actual bugs in the unit tests. A real pleasant surprise during our lockdown was how awesome the project owners/maintainers were in reviewing and, in most cases, accepting our pull requests.

The announcement of HHVM 2.3 talked a bit about Travis CI Integration. Now that we are starting to consistently pass unit tests for open source projects, some have added HHVM to their Travis CI build (awesome!). Here are some open source frameworks that have added us to their CI build:

Thanks to the above for adding us so quickly. And we have many pull requests outstanding for other open source frameworks to do the same.

The performance team blew through their lockdown performance goal of 15% and ended up at 16% for running facebook.com.

The updated performance results after our 3-week lockdown

This can only mean good things for other PHP code out in the wild. The performance gains came from lots of small improvements, and a few big ones. Some of the biggest wins were:

I am sure you are thinking to yourself, “all these gains and statistics are nice and everything, but what about the beards?!?” Right, you then remember that in our beginning the lockdown post that “shaving was discouraged”. I am happy to report that we also succeeded in maintaining a state of minimal facial hygiene throughout the lockdown. And here are the pictures to prove it. 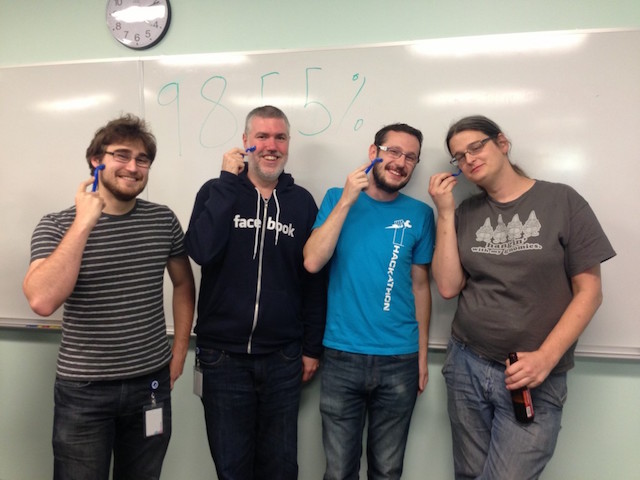 SaraG had a beard in spirit 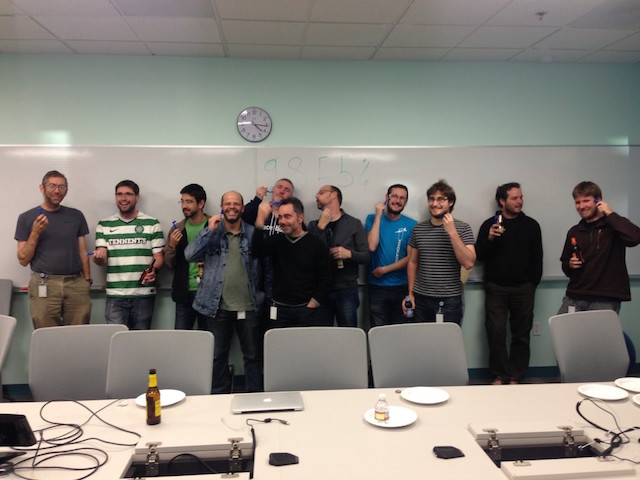 Did we meet our goals?

Remember the three success vectors that were posed at the beginning of this blog post?

Here are your answers:

Performance improvements will always be a core mantra for the HHVM team. That said, parity will be 1A on the priority scale for the team. We really do care about open source and the PHP community. 2014 will be a year where we go to great lengths to make HHVM first-class when it comes to both performance and parity. More unit tests passing for more open source projects and frameworks. Real world testing for PHP code out in the wild. Stay tuned for further updates on our progress and plans. Until then, Happy Holidays and Happy New Year!