This is a new attribute, marking a single function in a file as being the ‘main’ function for this file:

Like other functions in Hack, the function names must be unique within your project - i.e. projects with multiple entrypoints can not call both ‘main’.

This feature is a combination of a new language feature, and new library functions; the library functions are currently in the hsl-experimental package, and we expect them to move to the main HSL package in a future release.

In the Regex\ namespace, a regular expression is represented by the Pattern type instead of a string. A Pattern is obtained by using a re-prefixed string literal:

Now, the typechecker knows that the string is a regular expression! This means that it can warn us at typecheck time if we have written a malformed pattern:

Furthermore, the Pattern type has a type parameter which represents the shape of a match (containing positional and named capture groups), and the Regex\ APIs return this shape. This means that the keys of the shape are also known at typecheck time:

If a capture group isn’t matched in the input string, the value for its key will be set to the empty string.

Regular expressions matches are supported by existing IDE features, such as type-on-hover and shape key autocomplete: 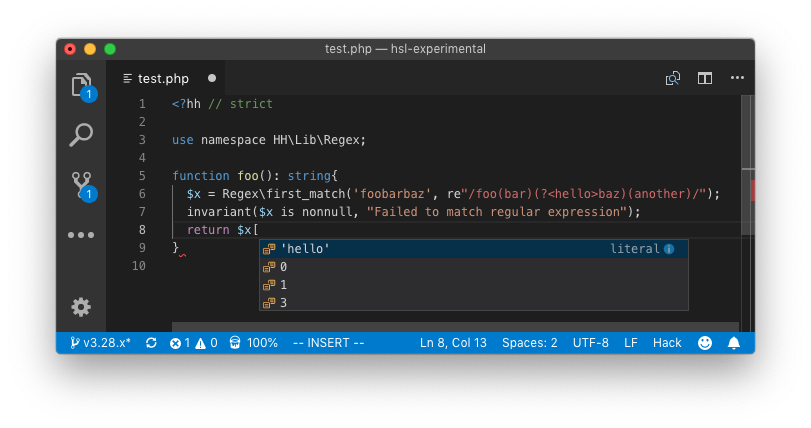 For the full API, see the source; it will join the main HSL documentation once the feature is no longer experimental.

For now, the prefix string is the only way to obtain a Pattern, meaning this library only works with statically known regular expressions. We will be introducing support for dynamic patterns soon. The Regex\ namespace requires limited forms of two new Hack features: prefix strings and integer keys on shapes.

Thanks to Marcy Park for building this feature, and Christopher Chedeau, Fred Emmott, Robert Lynch, and Kunal Mehta for API design.