HHVM 3.22 is released! This release primarily contains bug fixes, performance improvements, and supporting work for future improvements. Packages have been published in the usual places; see the installation instructions for more information.

Abstract syntax trees can be an extremely powerful basis for many kinds of tooling beyond compilers and optimization; HHAST is a new framework, built on top of Hack’s Full Fidelity Parser (FFP), providing a Hack object representation of a mutable AST. Unlike traditional ASTs, the FFP’s AST includes all ‘trivia’ - such as whitespace and comments - allowing you to fully recreate the file from the AST, or create an updated file after mutating the AST, preserving comments and whitespace.

Linters are designed for subjective or style changes which do not substantially alter the behavior of the code, and may be rejected on a case-by-case basis. Lint errors can provide a suggested fix, which may be based on an AST mutation, but doesn’t have to be.

We’ve included several linters as a starting point, including:

Linters can be used both interactively, or unattended. Autofixing is not supported unattended, however it will exit with non-zero if there are any lint issues, to ease integration with CI systems. 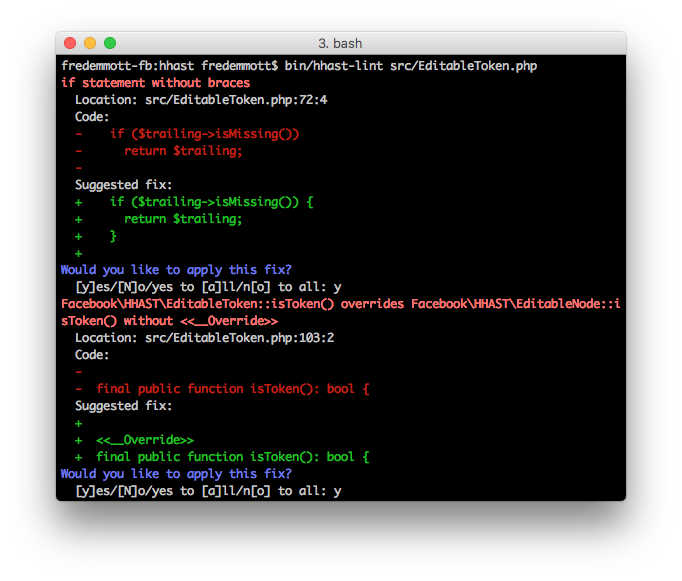 Migrations are for sweeping changes you want to apply across your entire codebase, and are often more complex. Taking this into account, the migration framework has built-in support for multi-step migrations (unlike linters). AST-aware migrations can be a powerful tool for:

Nullable vs optional fields in shapes

Currently, nullable fields in shapes can be omitted, and shapes implicitly support structural subtyping - that is, if shape A has all the required fields of shape B, it is a subtype of shape B, even if it also has extra ones. This can lead to bugs - for example:

We are addressing this by:

The existing syntax for nullable shape fields will continue to mean that they are nullable, but that they are required; fields can be made optional by prefixing the field name with ?:

To allow structural subtyping, add ... at the end of the field list:

So, you can migrate your code by:

We realize that adapting could be a substantial amount of work; to help, we are including a migration script with HHAST to make these changes for you: 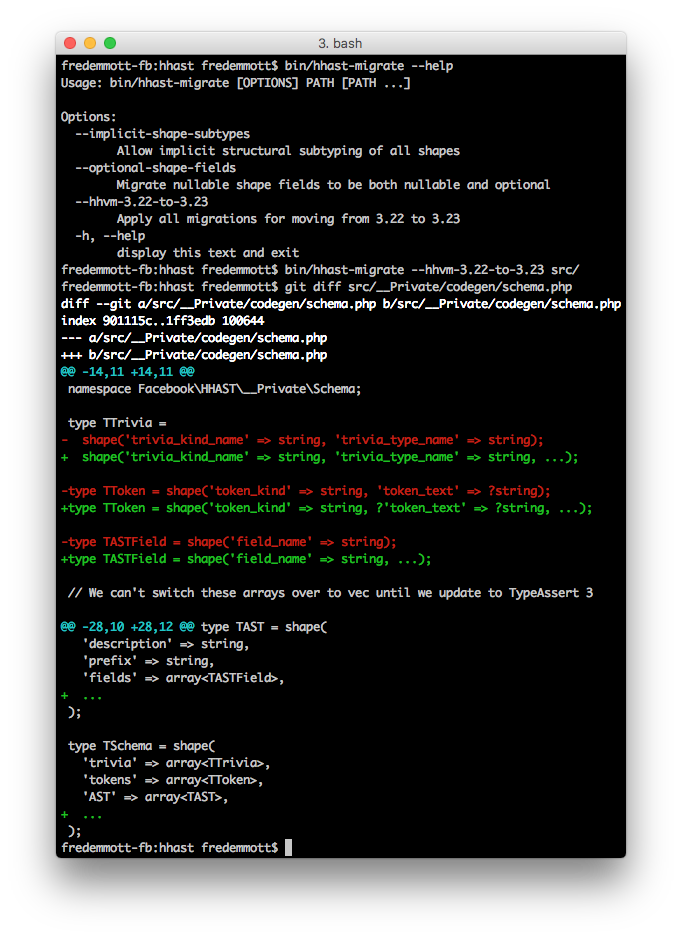 In a future release, we expect the typechecker to stop considering array<T> a subtype of array (without generics), and for array<Tk, Tv> to stop being considered a subtype of either array or array<T>. For example, every function call below will be a type error:

This is primarily to avoid bugs caused by passing array<int, Tv> to functions that take array<Tv>, which can lead to confusion as to whether the keys are important or not. array (without generics) is also changed as otherwise it would leave the possibility for these accidental errors, as it is effectively the union type of array<_> and array<_, _>.

We are likely to roll this change out on a more aggressive timeline than the shapes changes above, as once code is updated to be compatible with this change, it will continue to be able to run on older versions of HHVM. If you want to test with this feature or work on compatibility in advance, you can set the following flags in your project’s .hhconfig:

These options are experimental and will be removed in a future release of HHVM, so we don’t recommend committing them to projects that target multiple versions of HHVM.

Once the Hack Standard Library reaches v1.0 (currently expected before the HHVM 3.23 release), Hack Arrays (vec<T>, dict<Tk, Tv>, and keyset<T>) will become the recommended collections in Hack. Over time, changes will include: